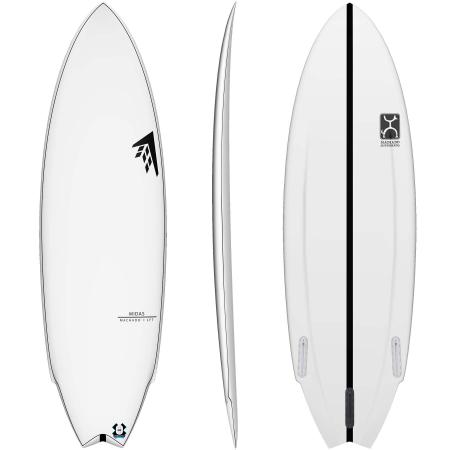 The outline of the MIDAS evolved from a few different influences. The tail was inspired by some 80’s twin fins and the wing is positioned right behind the trailing edge of the side fin to create a break point, and to pull the tips of the swallow closer together for maneuverability. The wing also creates more width in front of the fins which generates increased speed.

The nose is a touch wider than your everyday short board but without an ‘eggy’ feel. The wider nose and tail dimensions reduce the curve in the middle of the board which also helps generate speed.

Perhaps the most interesting design feature are the new bottom contours I’ve been working on which I’ve called “BOARD EAT BOARD”. The original concept began years ago when I rode one of George Greenough’s edge boards which led me to a whole new approach to bottom contours and edges.

I made quite a few boards until I finally adopted this new bottom. The general idea is that you have 2 boards working in your favor. The ‘inside’ outline creates a flat bottom concave that runs all the way off the tail, while the two side panels that run down each rail change from concave to flat to Vee, while still maintaining a deep single concave down the middle. The overall effect is increased performance and speed.

LFT
(Linear Flex Technology) White Deckskin – LFT incorporates Firewire’s SPRINGER HD, a 0.75″ (18 mm) wide aerospace composite that runs down the centerline of the board, representing the next generation in our SPRINGER technology. The SPRINGER HD runs the entire length of the board and plays a pivotal role in optimizing flex from nose to tail.

Due to oversized packaging, surfboards are shipped using various freight options. When ordering a surfboard your shipping charge will be added after the order is submitted. You will receive shipping quotes via e-mail for door to door as well as airport delivery usually within 1 business day. The shipping fee will then be added only upon your approval.